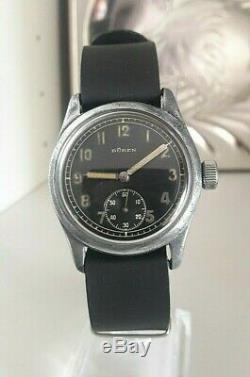 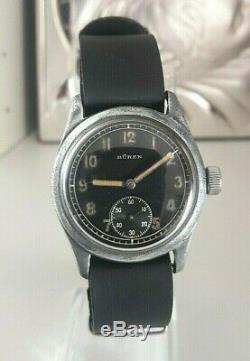 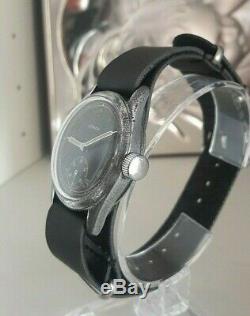 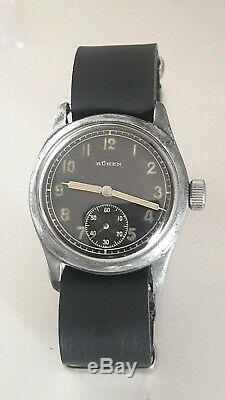 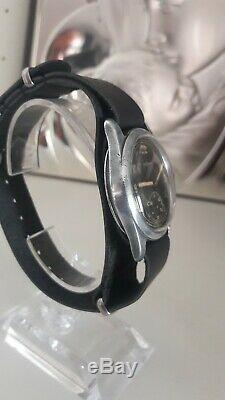 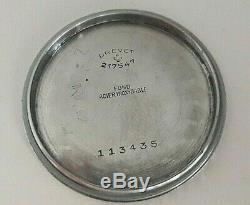 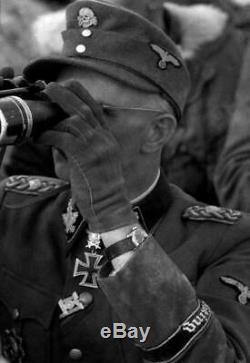 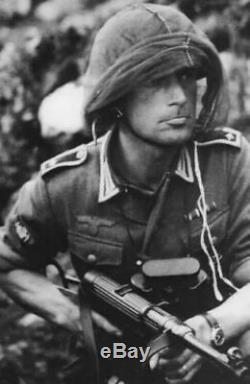 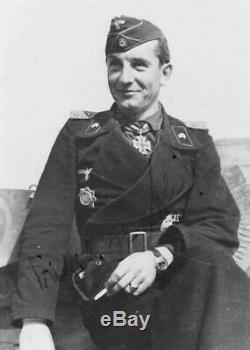 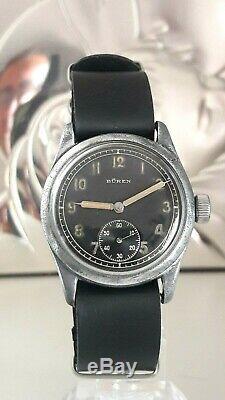 Beautiful military ww2 wristwatch produced by the Swiss company "Buren" in the years' 30 and 40 during the war. It is a large watch for the time, measuring about 33,4 mm (without crown) and 36,3 with the crown (original).

In diameter with a black color dial perfectly preserved and Arabic numbers from 1 to 12. At the bottom, instead of the number 6, there is a second small dial, pure black in color, for seconds. On the back of the stainless steel case is engraved with the proper military code"D H" below.

14 "Grand Prix", 15 jewels working perfectly and fully serviced. The watch is recharged by hand, is equipped with anti-shock mechanism as required by the offices of the Wehrmacht, stainless steel caseback. The wound has a maximum duration of 38 hours. The alphanumeric code"D H" engraved on the back stands for "Dienstuhr Heer"(Army Watch in service) and the serial number was written in the Soldbuch of the military who had received it.

At the end of the service would have to return. All watches German soldiers were designed for the Wehrmacht and from this ordered from different manufacturers in Switzerland and Germany Titus, Alpina, Mulco, Silvana, Minerva, Helveta, Record, Arsa, Helma, Helios, Buren, Zenith, Longines etc. Both pocket watches wrist those who had to have an end plate can be unscrewed and were shock resistant. They must also have the black dial with a smaller dial for the seconds.

The watch are 100% original, recently fully revised. Working well and keep the time.

Wehrmacht issued WWII wrist watches were manufactured by many Swiss and German watch makers contracted by the German government. They are manually wound and most often have screw-on stainless steel case backs, are/were shock/water resistant and had a nickel plated brass (sometimes steel) watch case. The dial face was black with luminous (radium, long faded) numbers and hands with a sub seconds dial. Variations will be encountered including snap-on case backs for the German made watches. The watch case diameter will range about 34mm.

REVUE Sport (Swiss) Wehrmacht issue watch. Wehrmacht issued GERMAN made watches did NOT have these'D'codes, some German made watches for the Navy (KM, M or anchor) and Luftwaffe'FI' (Flight) or'RLM' (Reich Air Ministry) were coded. Imported contract watches were required to have these markings in order to facilitate contract documentation (the Wehrmacht excelled at record keeping). It is commonly felt that the GERMAN watch makers were not required to use D codes since they were closely regulated and inspected by the German Government as a matter of course. These "old timers" were issued by the Luftwaffe to their pilots throughout WWII.

The issuing unit was responsible for maintaining and ajusting these valuable timepieces, these watches were never intended for "off mission" personal use. The item "VINTAGE RARE WW2 German Army Military wehrmacht DH SWISS WATCH BUREN GRAND PRIX" is in sale since Saturday, August 15, 2020. This item is in the category "Jewelry & Watches\Watches, Parts & Accessories\Watches\Wristwatches".

The seller is "militaruhren2wk" and is located in Milano. This item can be shipped worldwide.