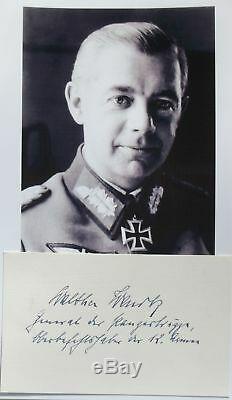 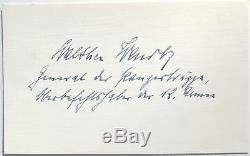 Walter Wenck [1900 1982] was a prominent German officer who was the youngest General in the Army and a staff officer during World War II. Wenck served as Chief of Operations for the 1st Panzer Division and was then appointed Chief of Staff of the Sixth Army. Wenck is best known as the commander of the German Twelfth Army which was given the impossible task of saving Berlin in 1945.

The autograph is signed''Walter Wenck'' and he added his rank with additional sentiment in German in blue fountain pen. The card measures 5.50 x 3.50 inches and is in fine condition.

The autograph is authentic and is a nice example of the prominent World War II German commander. We have listed a nice collection of military, aviation and astronaut autographs. Our policy is simple, all our autographs are researched and guaranteed authentic with''No'' time limits.

Check out my other items. Be sure to add me to your favorites list. The item "Walter Wenck German General World War II 12th Army Commander Autograph''Rare'" is in sale since Thursday, December 28, 2017. This item is in the category "Collectibles\Autographs\Military".view" and is located in West Hempstead, New York. This item can be shipped worldwide.