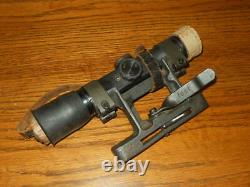 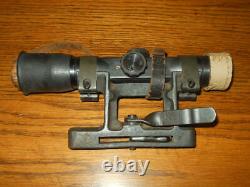 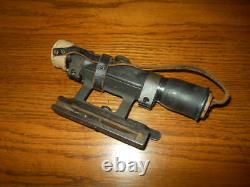 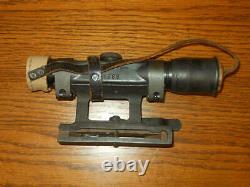 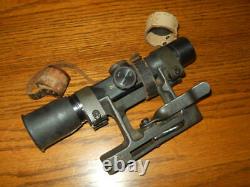 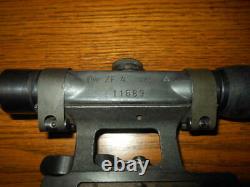 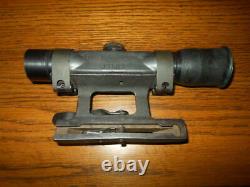 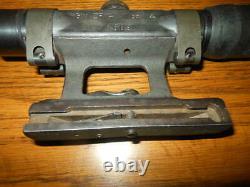 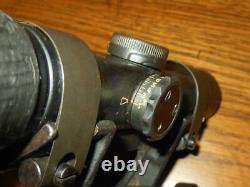 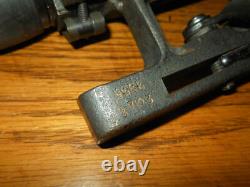 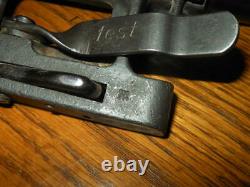 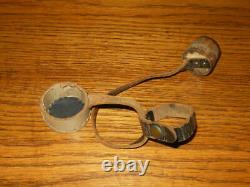 This was made for use on the G43/K43, MP44, and FG42 in use with various units throughout the war! The Gewehr-Zielfernrohr 4-fach (Gw ZF4x) or 4-Power Telescopic Rifle Sight, was designed after a thorough examination of the Soviet PU telescopic sight and the semi-automatic M1940 Tokarev rifle. It was concluded that the German military wanted a copy as fast as possible. This new scope was to be for us in conjunction with the newly produced G43/K43 semi-automatic rifle. Though mass-produced for use on all rifles, it was quite capable as a sniper sight, but unfortunately quality control was not consistent.

In capable hands and when constructed properly, the ZF4 was sufficiently successful in its role. Made of a stamped construction, it featured an elevation adjustment knob on the right side, with markings laid out in 50-meter increments, from 100 to 800 meters. Windage was adjusted via a knob mounted on the top. The reticle is the typical German Three-Post system. The Gewehr 43 or Karabiner 43 (abbreviated G43, K43, Gew 43, Kar 43) is a 7.92×57mm Mauser caliber semi-automatic rifle developed by Nazi Germany during World War II. The design was based on that of the earlier G41(W), but incorporating an improved short-stroke piston gas system similar to that of the Soviet Tokarev SVT-40, and it incorporated innovative mass-production techniques. Made of steel, this ZF4 / K43 sniper scope is in AMAZING used condition! Made by dow Waffenwerke Brunn A. , there are some slight marks, wear, and scratches due to the age, but features no corrosion, pitting, or damage! The manufacture code is prominently stamped into the side, and both the. Elevation and windage knobs function 100% correctly!

When I received this, the internal wax used to seal the optics had melted/leaked out of the scope, and as such, has left a coating on the ocular lens. I have cleaned off all the wax that was on the outside, but I have not taken it apart to clean the wax on the inside. Because this film is on the lens, it is very difficult to see through the optics. This will require an internal cleaning to make functional again. The mount is made of steel and is ORIGINAL to this set-up!

Scope Bands and Retaining Screws are also original, and not post-war... Scope appears to have had a previous serial number stamped in that was later crossed-out. A prominent WaA 214 (MUCH rarer than the WaA 359) is stamped into the right side. Locking mechanism is 100% FUNCTIONAL!

The rubber eye cup and leather lens covers, are all 100% ORIGINAL to this set-up! Covers are made of a combination of wood, leather, and ersatz leather. Would make an EXCELLENT addition to any collection or display!

Most of my items are vintage, and as such are AS-IS, so you must therefore expect a degree of wear due to age and/or usage. Although my passion is the Me109, I do offer many other German Aircraft Fw190, Me262, etc. , as well as USAF and Japanese items.

Occasionally I do offer many non-vintage items such as prints and art relating to the time period. Use is solely based on my authorization only. The item "WW II German Army Air Force G43 K43 FG42 ZF4 SNIPER SCOPE & MOUNT SUPERB" is in sale since Sunday, October 31, 2021. This item is in the category "Collectibles\Militaria\WW II (1939-45)\Original Period Items\Germany\Other German WWII Orig.

The seller is "messerschmitt_109" and is located in Thousand Oaks, California. This item can be shipped worldwide.